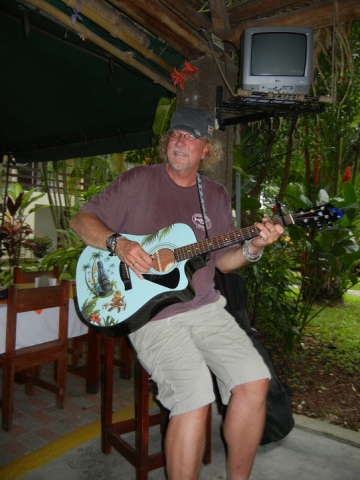 Tall Paul (Paul Bobal) was born in Cleveland, Ohio and raised in Virginia Beach, VA, where he played keyboards in "garage bands" from the age of 11. After seeing Doc & Merle Watson perform for freshman orientation at Appalachian State University, he taught himself to play acoustic guitar and started playing the college circuit in North Carolina. He then joined Stoney Creek, a band that opened for Hall & Oates, The Doobie Brothers and Jimmy Buffett, before striking out on his own after graduation. Since his move to Nashville, Paul has performed all over the globe and continues taking his music anywhere people will listen. As a solo act and as a duo with his wife Kristie he is constantly touring and entertaining enthusiastic crowds, playing almost 200 dates a year! In 2021 Kristie & Paul released their first all original duo album "Whiskey & Wine"

The duo’s live shows have become something of legend across the southeast. They’ve shared stages of various sizes and are equally at home in honky tonks and bars as they are on festival stages. But for as great as their touring live show has been, the roots of Whiskey & Wine happened when the pandemic shut 2020 down and forced Tall Paul & Kristie to reinvent themselves with weekly Facebook live shows. Shows which have grown their fan base as they showcased their talents worldwide.

"In an increasingly complex world where musicians are consistently focusing on only one style or sound, it is refreshing to hear an album like Whiskey & Wine from Tall Paul & Kristie. Over the course of the album’s 11 tracks, there’s a variety of sounds which showcase Tall Paul & Kristie’s well-regarded live show. It is that live show where the duo curated their easygoing style featured on songs like the jovial “Hangover” and “Acquired Taste.” But just when the album and their live show seem to be all about a jolly good time, they’ll hit you with the truth of “Hellfire & Brimstone” and “Bottle of Whiskey.” These songs, most inspired by the events in the life the duo and their friends lead, certainly showcase the album well but, better yet, they showcase Tall Paul and Kristie themselves."

The influences to Paul's music are as varied as the music itself. Playing the songs of the Beatles, Hendrix, the Doors and Yes early on, were the groundwork for later inspirations James Taylor, Doc Watson, Lowell George, Todd Rundgren and John Hiatt. "Can't Find My Way", Paul's first CD, is a combination of bluesy pop music and modern rocking country. This album was voted one of Nashville's Best Independent releases and Paul was voted one of the top Rock Vocalists in the Nashville Scene's Readers Poll alongside John Hiatt.

And if you hoarde fonts (like some of us) try Paul's font "Tall Paul" from Emerald City Fontwerks (you have to scroll down the page to find it). It is a handwriting font that was designed by TP and has been used by several TV stations, a california winery and an australian rock band!

If you are interested in getting some "MUSIC", please visit our our online store.